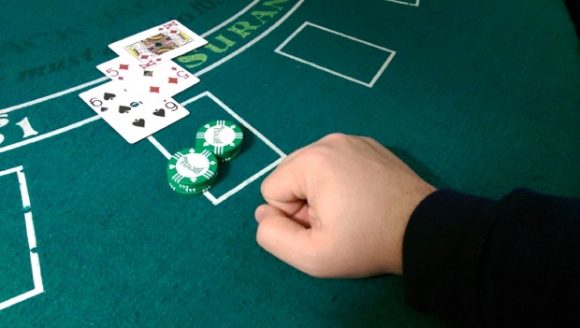 Not to be confused with Caribbean Blackjack or Caribbean Stud Blackjack (though one could easily see how such confusion would ensue), Caribbean 21 is one of those games that has so many rule twists relative to the standard rules of Blackjack that one can envision approaching this in two ways. The purists may not be the biggest fans, but those looking for something with a lot of possible options and outcomes may quite like the excitement that this could bring. One could definitely see this being a fan favorite of online players who prefer something a little spicier than usual.

The short version of the story is that there are many more options within the game that make it easier to win more out of hands that appear favorable, but ties now to the dealer instead of it being a push, thus decreasing the chances of actually winning the hand.

Perhaps a good way to think about the rules of Caribbean 21 is the following: just about anything is possible. What does that mean in practice? Well, it defines the first kind of variation we found: anything is possible after the initial deal – surrendering, splitting, doubling, hitting, or staying. It should be noted that splitting is available even when the two cards on the table are not the same. Aside from there being a side bet, it appears that anything is possible here.

The next variation sounds like the same, and really it actually is, but it’s worth repeating: splits, surrenders, doubles, and hits are always possible even after the initial deal. What this means is that the table can begin to look a bit crowded (if you have the option of splitting so many times) and that the game can be quite dynamic. This is also encouraged by the ability to double and redouble at any time. You also have the option to surrender at any time.

If this sounds all too good to be true in a way, well, that’s because it does not come with one large drawback relative to normal Blackjack: ties now do to the dealer. Do bear this in mind when considering how much doubling and splitting to do! It is also worth noting that the payouts for Blackjack here are 1:1, as opposed to the norm of 3:2

Finally, there is one last little twist that gives the game its name: It’s possible to have a kind of super-Blackjack hand that defeats normal Blackjacks. This is called the Caribbean 21 and it consists of having two ten cards and an ace card totaling 21. It might seem that this would only be used rarely.

Whether or not one prefers this variation of Blackjack will likely be traced back to what one wants from the game more generally. The purists out there may not like so many options being on the table, but those looking for something dynamic may find this to be right up their alley. We imagine it’s likely to be appealing for the free gamers out there, as this adds a lot of flavor to the game!