World’s Most Liberal 21 is a proprietary game that can only be found at two properties. Those two properties are The Plaza and The Las Vegas Club, both of which are located in Downtown Las Vegas by the intersection of Fremont Street and Main Street. Each casino offers just one table of this game, although that table is open virtually 24 hours a day. The World’s Most Liberal 21 table at Las Vegas Club can be found in the area that is transformed into the party pit Thursday-Sunday nights. The payouts are the same whether the party pit is open or not, and the game is open all hours of the day. The table at The Plaza can be found facing the center bar, just to the right of the craps pit. The minimum is usually $5, but can be $10 during peak times. The maximum bet at Plaza is $5000. At Las Vegas Club, the maximum bet is $500.

The main concept of World’s Most Liberal 21 is the same as standard Blackjack. The game is dealt with 8 decks, with about a 5-6 deck penetration. The goal is to get as close to 21 without going over, and beat the dealer. Ties push in World’s Most Liberal 21, just as they do in standard Blackjack games. The player and dealer are both dealt two cards. Player’s cards are dealt face up, with just one dealer card dealt face up.

There are some very unique rules beyond just the blackjack payouts. Players may double on their first 2, 3, or 4 cards. This provides some situations where a player should not double 9, because if they get a 2, they would be in a better position to double. Players may also split to an unlimited number of hands, including aces. Split aces may be resplit, hit or doubled. Late surrender is allowed in World’s Most Liberal 21, which means that once it is confirmed that the dealer does not have a blackjack, a player may give the house half of their bet and fold. If a player receives 6 cards without busting, they automatically win the hand. The dealer must hit a soft 17. 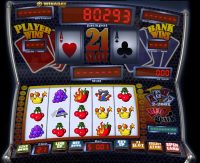