How Does the House Get its Edge? 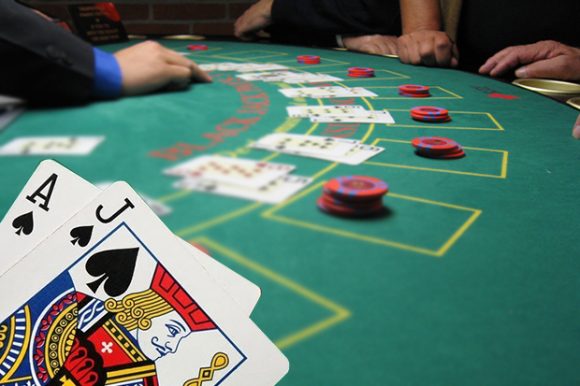 It’s no accident that blackjack is the most popular casino game in the world.

The simplicity of the game is beautiful – the basics can be learned in minutes, while it takes years of work and study to become a true advantage player.

For all of blackjack’s fame, though, it’s amazing how poorly understood one central element of play is. Specifically, where does the casino’s house edge come from?

After all, the game is unlike slots, where a house edge is built into the structure of play; poker, where players face off against each-other and the house takes a cut of the action; or roulette, where the presence of the 0, 00, and/or 000 give the house a clear advantage.

[Pro tip: when it comes to understanding the house edge in slot gaming, and its player-centric equivalent return-to-player (RTP), our Sister Site Latest Casino Bonuses is unmatched!]

In blackjack, players play against the house, on seemingly equal footing…

… yet we know that the game wouldn’t be offered unless the house enjoyed a reliable advantage. So what gives?

The short answer is that the house is at an advantage because players are forced to act first. But why, exactly, is that bad news for players?

The answer is simple, if under-appreciated: it’s called the Double Bust Rule.

All About the Double Bust Rule

Suppose a blackjack hand ends in a tie: the player holds 18, and so does the dealer. What is the result?

A push, of course!

It’s a tie – neither party wins, and bets are returned to players.

But suppose a blackjack hand ends in a different kind of tie… suppose the player ends with 22 (a bust) and the dealer does, too. What’s the result then?

It’s not a tie any longer! This time, the house wins.

This is the essence of the double bust rule. Because players act first, they automatically lose whenever they bust…

… even if the dealer busts, too!

Let’s get into the mathematics a little, and determine just how much the double bust rule is worth to casinos.

The question we should ask is…

Are All Other Things Equal?

Interestingly enough, when blackjack was first becoming popular in the 1930s and 40s, casino operators worried that the game favored the house too much!

They were concerned that players would abandon the tables, since the double bust rule put them at such a disadvantage. So they introduced other rules that tilted things back in the player’s direction.

Consider that, aside from the disadvantage of acting first, every other rule advantage favors the players, not the house!

When taken all together, these considerable perks make a huge difference in house edge, to the advantage of players. While the double bust rule is worth an 8% for the house, look at what tilts things back towards the player:

In other words, it works out to the best odds in the whole casino!

It’s important to remember, though, that not all of these rules may be active at every table, or even at every casino…

… so it’s possible that the house edge may be higher, depending on those and other factors.

No matter the specifics, though, the central truth remains that the casino derives all of its edge from the double bust rule. If other offerings seem to favor players, that’s because of a casino tradition

Believe it or not, it’s possible to decrease the house advantage even further… even to

There are two major tools at player’s disposal in this aim: counting cards and promotions.

Let’s begin with counting, a well-known, wildly misunderstood practice. In real life, card counting does not resemble the movies, where mad geniuses win one massive hand after another, jumping into a jacuzzi full of money at the end of the night.

In the real world, anyone can count cards – after all, it’s called card counting, not multivariable card calculus!

What’s more, counting doesn’t provide players with a formula for endless, sure-thing wins. Like the other advantages mentioned above, proper counting adds a small percentage of advantage to player’s chances against the house. In a six-deck game, good card counting is worth about 1.5% against the house edge.

Which means, when combined with proper strategy, the 3:2 blackjack payout, and the other advantages described above, players can end up with a 1% advantage over the house!

That is what’s meant by an advantage player.

It won’t turn you into the Rain Man, or Zach Galifianakis in The Hangover. Card counting can, however, give you a slight advantage over the house in the long term.

By far the most overlooked tool available to today’s players is the promotional bonus.

Most new players are so excited to begin playing, they forget that one of their best keys to success is found before they even take their seats!

The meteoric rise of online gambling has left casinos in open competition for the betting action their customers – gamblers – provide. As such, they routinely offer all kinds of promotions to entice players to trust them with their bankrolls. Making wise selections can have important implications for savvy gamers.

These promotions might mean from deposit bonuses, where initial deposits are matched, doubled, or more! It might mean coupons that match your bet, or provide you with a free ace-in-the-hole. Or they might mean special blackjack rules are in play, such as 2:1 blackjack payout, which is worth nearly 3% advantage over the house by itself!

We recommend paying close attention to our list of casinos offering blackjack, and watching like a hawk for strong promotions. They might not make it into cinematic history, but they can add hundreds (or thousands) to your bottom line!