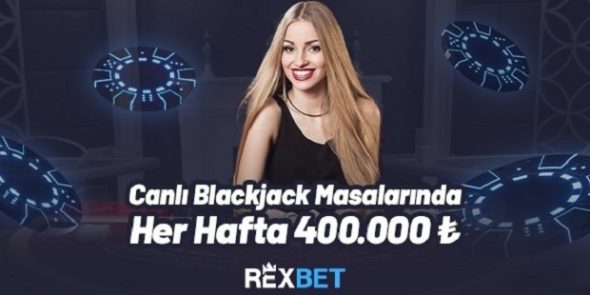 Turkish-focused betting site Rexbet is launching a special live dealer online blackjack promotion for the end of the year, offering a chance to win a large chunk of a TL400,000 prize pool when you play.

Punters who bet at least TL50 during the promotion will have a chance to take home a share of the pool, with a minimum share of TL100. Players will have to play at least five hands of live dealer blackjack using the Evolution tables in the game. The promotion will run through New Year’s Eve, and will pay back players who wager at least the TL50.

The promotion was announced in an email to affiliates, and it said in part (translated to English): “Those who place a minimum bet of 50 TL at the Evolution Blackjack tables have the chance to get a share of the 400,000 TL cash prize pool if they play a total of 5 Blackjacks during the week. Moreover, the minimum prize for each player is 100 TL!”

Those interested in obtaining the bonus can do so now by visiting the Rexbet casino site.