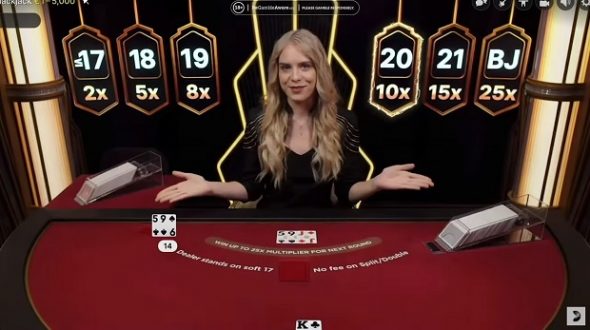 Lightning Blackjack is available in both live dealer and first-person modes, and sees players working to score a winning hand against a dealer as would typically be the case. The game has a series of different win multipliers assigned on every hand for hands ranging from 17-Blackjack. These change, and in order to pay for this, you end up having an extra bet paid in addition to the wager you put down on the game. As an example, a $20 bet would see a $20 premium paid for that multiplier. This game also plays out like Evolution’s Infinite Blackjack in the live dealer mode, which sees players making decisions and having a dealer play them out for an unlimited number of players.

The game does eschew the traditional 3:2 blackjack that’s paid out in the game but is adjusted when you score a win multiplier for the prize.

Check out a trailer/tutorial for the game below:

“It’s high time that we brought our Lightning brand to the player favorite Blackjack,” said Evolution’s Chief Product Officer Todd Haushalter. “We’ve been very careful to preserve the true essence of Blackjack, while adding extra layers of excitement with added Lightning multipliers. The end result is a beautiful game that gives players the opportunity to have enhanced payouts whilst still playing the game the way it was originally intended – and I think players are going to love it!”