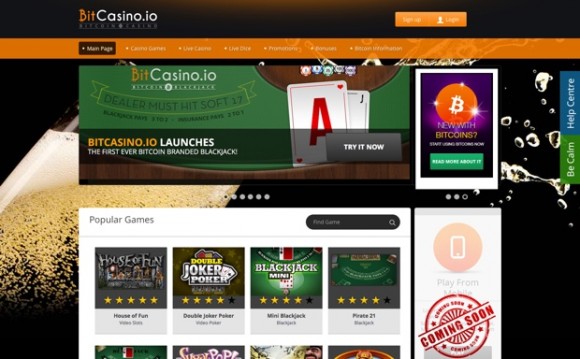 Internet betting operator BitCasino has announced that it has launched the world’s first Bitcoin powered blackjack games on its virtual gaming floor.

The new games will allow players to bet on up to five hands at once, with wager limits ranging from 1mBTC (roughly 40 cents as of 11/4) up to 600mBTC (about $230 as of 11/4) on each hand. Furthermore, the game will allow players to speed up and slow down the action on the tables as well as integrate an Auto Play feature that will allow hands to select a strategy and automatically have the hands played out for them.

Commenting on the release of the cryptocurrency games BitCasino released a statement which read: “We have experienced extraordinary growth, both in terms of new player registrations and overall turnover, and the feedback on our games has been excellent. That’s why we’re reinvesting as much as we can into new games like Bitcoin Blackjack – we are now bringing a mainstream experience to this new and exciting cryptocurrency market. The rapid adoption of Bitcoin worldwide and the simplicity of processing deposits and withdrawals, has seen a huge influx of players from countries we would have never imagined.”

BitCasino launched earlier this year, becoming the first licensed and regulated online betting in the site to be powered by the cryptocurrency Bitcoin. The casino is owned by mBet Solutions NV, and features software from the betting firms BetSoft, Net Entertainment, and more.

Next Article: Mark Wahlberg Stars in “The Gambler” Remake